Death in Yellowstone: Accidents and Foolhardiness in the First National Park 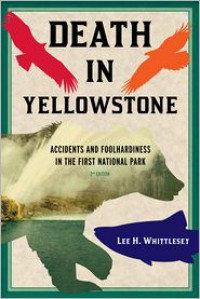 Don't die at Yellowstone because 1. it will probably be painful and 2. Lee Whittlesey will include you in the next edition of this book and blame you for your death. As written by a former park employee, the book spends a lot of time railing against those who would try to de-wildernize the wilderness, which I get, but it goes a little too far sometimes. I don't think surprising a bear is really anyone's fault. (I also... think he should step off his use of "ironic" because I'm not sure it applies 100% of the time.)

Speaking of, this book confirmed that I really should be afraid of bears. It made me never want to go near a hot spring because it seems really easy to slip in and die an agonizing death (hand shaped sheath of skin, anyone?). The hot springs and the bear chapters are the best. Whittlesey is nothing if not thorough and I think someone should collect the data from the book and make a lot of charts and graphs - what decade was most common for park death? What age? What mechanic? IT'S FASCINATING in a really morbid way, and tragic. Despite the hard line Whittlesey takes, there is still a sense that the book is honoring and memorializing the deaths, trying to prevent more from happening, and showing how fast it can happen, which to me is one of the more terrifying aspects.

favorite moments: the guy who died in a fight with a bear because he slept with his bacon under his pillow. The guy who decides to jump his horse over a stranger on a bicycle, but the horse falls and kills the man.
Tweet